I love Google’s products; although sometime judging by the lack of integration (of their own products) and poor documentation it feels like Google doesn’t really want anybody to use them (also Google please hire some decent designers to make things look pretty; note that programmers that know how to use photoshop are not designers).

One would think that using GWT Designer for creating an application to be deployed on Google App Engine ought to be very straightforward.  Unfortunately, that is not the case.  Bellow I will briefly describe what worked the best for me (and then what ought to have worked but did not).

By far the best way of developing GWT applications for deployment on GAE is by using eclipse (for people that like using UI’s).

Upgrading eclipse to the latest version that is supported by Google might be a good idea at this point (painless way of doing that is described here).

Install needed plugins: Google Plugin for Eclipse (GPE)  (I would think this would include all of Google’s plugins but it did not install all of them in my case), so you may need to install some of them individually GAE,  GWT,  GWT Designer

Make sure to check the “Generate project sample code”; and also that both defaults for GWT and GAE are selected. 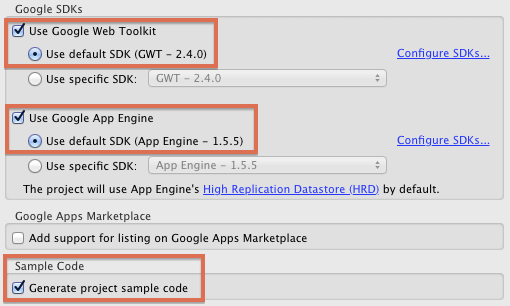 To make sure that things are working right click on the project and run it as web application.

(otherwise you will get [ERROR] Unable to bind socket on port 9997 — is another session active? java.net.BindException: Address already in use).  Note sometime you may need to restart eclipse to free up the port.

Now we want to clear the project; and to create one of our own.  Open the war/WEB-INF/<Project-Name>.html file and remove

Then in src/<Your-Package>.client.<Project-Name>.java replace quite long function  “public void onModuleLoad(){ …… }” with:

Now You have a sparkling clean project.

Displaying a blank page is probably not your goal; so now we can use GWT Designer to make things pretty.  To do that you need to open your java file, i.e. src/<Your-Package>.client.<Project-Name>.java  by right-click

And the select “Design Tab” at the bottom of the window (next to “Source”) and you will see the GWT Designer’s Palette.  Add some components and run your application again.  Everything should be working now  😉 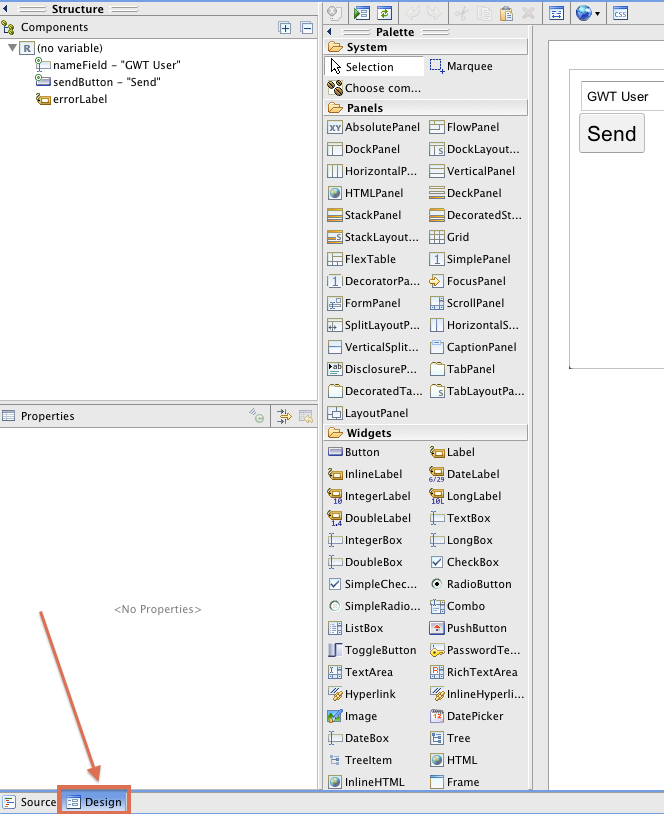 After confirming that things are running fine locally, you can deploy your project to GAE. 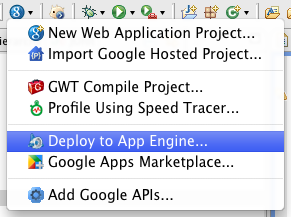 What ought to Work but Does Not

You can easily create an application with GWT Designer.  However deploying to App Engine does not work; eclipse complains about absences of war directory and xml configuration files etc.

Also I have no idea why GWT Designer’s “design” tab is not available when the GWT file is open from inside of either “GWT Project” or “GAE Web Application Project”.

see http://ActiveIntelligence.org
View all posts by Neil Rubens →
This entry was posted in Uncategorized. Bookmark the permalink.